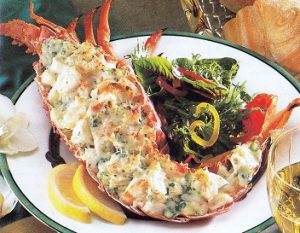 And what better way to celebrate than at a top fine dining restaurant in Torrevieja?

Oh boy, do we have a special day coming up on Wednesday 24th January. Not only do we have an evening of fine dining and magical music for our guests here at Christopher’s Restaurant, but it’s also National Lobster Thermidor Day in the United States! So, I thought, to mark the occasion, I’d let you in on a few ‘Thermidor facts’ you may not know.

What is Lobster Thermidor?

There aren’t many people who don’t love lobster, and it is a real treat. One of the most popular ways to eat lobster is prepared as Lobster Thermidor, a rather special dish. It’s creamy, cheesy, and presented in the shell with a baked cheese crust. A delight for the taste buds. At the end of this blog, you’ll find a recipe for Lobster Thermidor that you can try at home. (TIP! Only use fresh lobster, never frozen.)

Where does the ‘Thermidor’ come from?

Now, in the best Michael Caine tradition – “Not a lot of people know this” – the name Thermidor comes from the French Republican Calendar. It was the eleventh month, the second in the summer quarter, and the name is derived from the Greek word ‘thermos’, meaning hot. The month started on July 19th, and ended 30 days later in mid-August.

Lobster Thermidor was named after the month Thermidor. There are two possible reasons why:

Other Thermidor facts to bamboozle your friends with

Here are a few more Thermidor facts to bamboozle friends with:

So, how do you prepare Lobster Thermidor?

Here’s a recipe for Lobster Thermidor that you can try at home:

The ingredients you need:

If you aren’t used to handling live lobsters, keep the bands on – you don’t want your fingers chopped off!

To boil your lobster, fill a large pot 2/3 with water. Add salt. Bring to a boil, and add the lobster. Bring back to the boil. Boil a 1 ½ lb lobster for between 7 and 9 minutes.

Whatever you do, don’t overcook – you’ll end up with tough, chewy lobster meat. You can also steam or poach lobsters, as well as grill or barbecue. 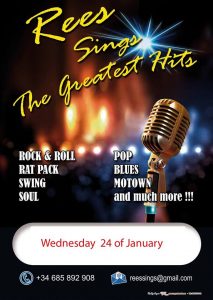 Now, for the Thermidor bit!

Cut the lobster in half lengthways, and remove the meat from the claws and tail. Leave to one side. Remove any meat from the head, and set aside. Cut the meat up into pieces, and place back into the shell.

Melt the butter in a large skillet over medium heat. Add the shallot; cook and stir until tender. Mix in the fish stock, white wine and double cream. Bring to a boil, and cook until reduced by half. Mix in the mustard, lemon juice, parsley, salt and pepper.

Place the lobster halves on a baking sheet, and spoon the sauce over the lobster meat in the shell. Sprinkle Parmesan cheese over the top.

Grill for 3 to 4 minutes, just until golden brown. Serve immediately.

Of course, if you don’t fancy all this work, you should come and enjoy a lobster on 24th January, along with ‘An Evening with Rees’. And, of course, you don’t have to eat lobster – we have a menu selection to suit all tastes.

To avoid missing out, call us on (+34) 600 01 28 24 to book your table and enjoy an evening to remember at one of Torrevieja’s top 10 restaurants (as rated by diners on www.tripadvisor.com).