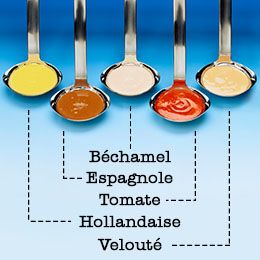 Five mother sauces give birth to hundreds of offspring

March is National Sauce Month in the United States, which got me thinking – just how many sauces are there? The answer is hundreds, if not thousands. A great sauce takes any food to another level. Think about it, and you’ll realise that you know at least one person who has a certain sauce with practically every food they eat.

Yep, a sauce is often the key that unlocks the real flavour of our food. Yet, most people don’t make their own sauces. It’s so easy to buy a ready-made sauce from the supermarket, or a packet to which you simply add water, that we’re losing the art of making sauces at home.

In this post, I’ll take a quick look at what are called the five mother sauces – from which most hot sauces are derived.

What is a sauce?

First, let’s define what a sauce is.

Well, a sauce is a liquid or semi-solid foodstuff. To be a sauce, it must be added to other food. Why do we do this? To:

Sauces can either be hot or cold, and served with savoury or sweet dishes. It could quite reasonably be argued that sauces include salsas, dressings, coulis, salad dressings, chutneys, and so on.

Thank the French for their sauciness

Each of these sauces can be used on its own as an accompanying sauce. However, by adding other ingredients, you can create any number of other sauces to suit different foods and individual tastes. These mother sauces are extremely versatile, and are used as pseudo-ingredients themselves.

For example, let’s take béchamel, a sauce that is a key ingredient in lasagne and macaroni cheese. Also, it’s a sauce that is the foundation of cream sauces, such as Alfredo sauce.

And if you take hollandaise sauce and add vinegar, herbs, and shallots… Voila! Béarnaise sauce.

Unfortunately, in many restaurants you no longer hear the classic sauce names. Perhaps this is a symptom of losing the ability to create sauces at home. Instead of béchamel, you’ll find that menus offer a white or cream sauce; espagnole has become demi-glace; hollandaise is a butter sauce; velouté is a blonde sauce; and, perhaps the worst of all, tomato has become red sauce.

Next time you’re in the kitchen, why not make your own sauce? Have a little fun and eat more healthily in the process.